His Excellency, Stavros Lambridinis, EU Ambassador to the US in Dallas for Inaugural Gala & EU Texas Economic Leadership Forum

His Excellency, Stavros Lambridinis, EU Ambassador to the US in Dallas for Inaugural Gala & EU Texas Economic Leadership Forum

is honored to present

Ambassador of the European Union to the United States

With Gratitude to our Sponsors

Ambassador of the European Union to the United States 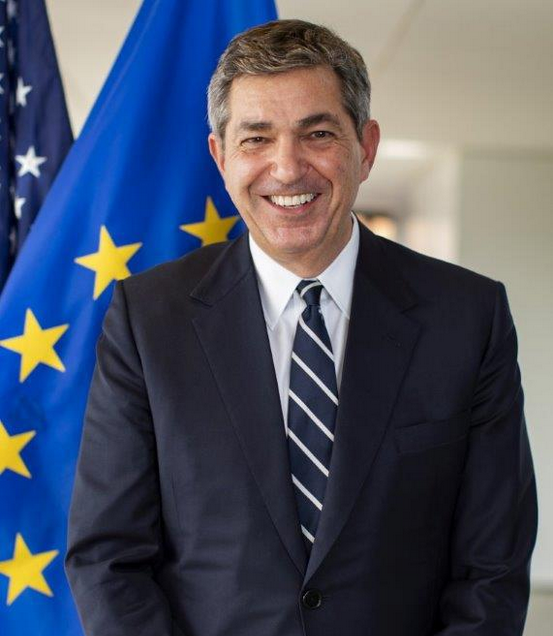 HE Stavros Lambrinidis is Ambassador of the EU to the United States as of March 1, 2019. From 2012 to February 2019, he served as the European Union Special Representative for Human Rights. In 2011, he was Foreign Affairs Minister of Greece. Between 2004 and 2011, he was twice elected Member of the European Parliament (MEP) with the Greek Social Democratic Party (PASOK). He served as Vice-President of the European Parliament (2009-11), Vice-President of the Civil Liberties, Justice and Home Affairs Committee (2004-09), and Head of the PASOK Delegation (2005-11). Between 2000 and 2004, he was Director-General of the International Olympic Truce Centre, an International Olympic Committee organization. He served as Ambassador ad personam of the Hellenic Republic (1999-2004); Secretary-General of the Greek Foreign Ministry, responsible for Expatriate Greeks (1996-99); and Chief of Staff to the Greek Foreign Minister (1996). Between 1988 and 1993 he worked as an Attorney at Wilmer, Cutler & Pickering in Washington, D.C., specializing in international trade, transactions, and arbitration. Mr. Lambrinidis was born in Athens, Greece in 1962. He studied Economics and Political Science at Amherst College (Bachelor of Arts degree, 1984) and Law at Yale Law School (Juris Doctor degree, 1988), where he was also Managing Editor of The Yale Journal of International Law. He is a graduate of the Athens College High School in Greece. He is married and has a daughter.

Please reach out to Erin McKelvey, Executive Director emckelvey@eacctx.com for sponsorship opportunities or go to our registration page

The Debate Chamber at Old Parkland

The Ambassador will Keynote both events